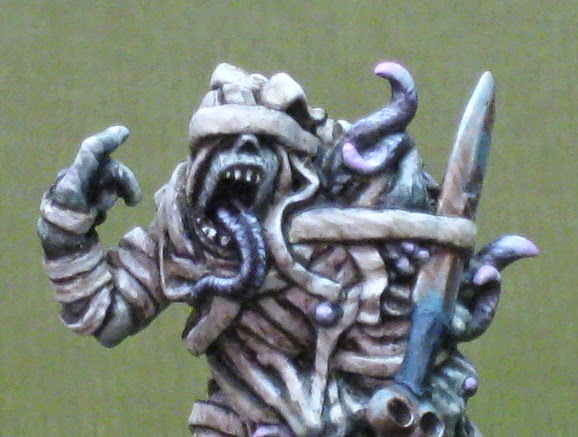 The Fiend Folio Project has gained another member. This time out it's an adherer... the oft disparaged sticky mummy.


Basically this guy's gig consists of hanging out looking just like a mummy until encountered, after which it becomes evident that A) he's not a mummy, B) he's not even undead, and C) everything (and I do mean everything) sticks to him as if he were covered in super-strength flypaper. (For more on the adherer's checkered past and uncertain present, check out Bogleech* and the recent offering from Patch at The Daily Bestiary.)
* The source of this post's title, in fact.

I've come close to doing this conversion before. What could be easier than slapping a sword onto a mummy's chest, after all. The deal-breaker was my fear that the result would look like a mummy with a sword slapped on its chest.

That changed with the recent release of FGCW16 - Undead by Fenris Games. Clearly this is a mummy of sorts, but with numerous atypical features (elongated tongue, tentacles, grotesquely enlarged left arm). Just the thing for a monster that looks like a mummy but isn't. 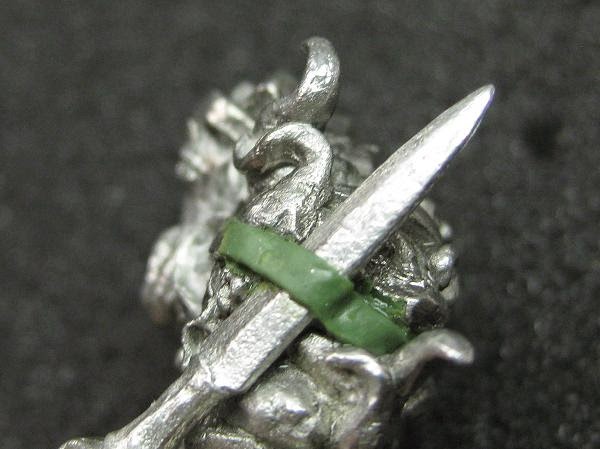 The actual conversion was easy enough. I filed a groove into the left shoulder, nestled a sword from my spare parts box among the various sores and writhing tendrils, and used green stuff to extend one of the wrappings over the blade. Hopefully that last part conveys the sense that the wrappings are themselves animate and actively involved in the adhesion process. If nothing else, it makes the sword look like a proper part of the mini as opposed to a clumsy "bolt-on" by yours truly. 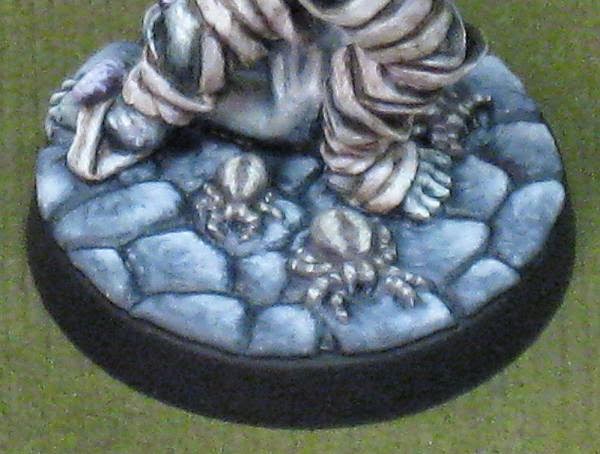 The FF entry mentions the adherer's affinity for spiders so the base topper by Otherworld seemed fitting.

Painting followed the mode of some of my recent greyed-out undead, only this time with a green fleshtone as opposed to blue or purple. The tips of the tentacles wound up bright pink as I really wanted them to stand out. The sword is my attempt at NMM bronze following the advice found at Sprocket's Small World.

I've Googled "Adherer Miniature" to no avail so this may well be an internet first. You're welcome, internet. While I sit here feeling extremely pleased with myself, do enjoy the following: 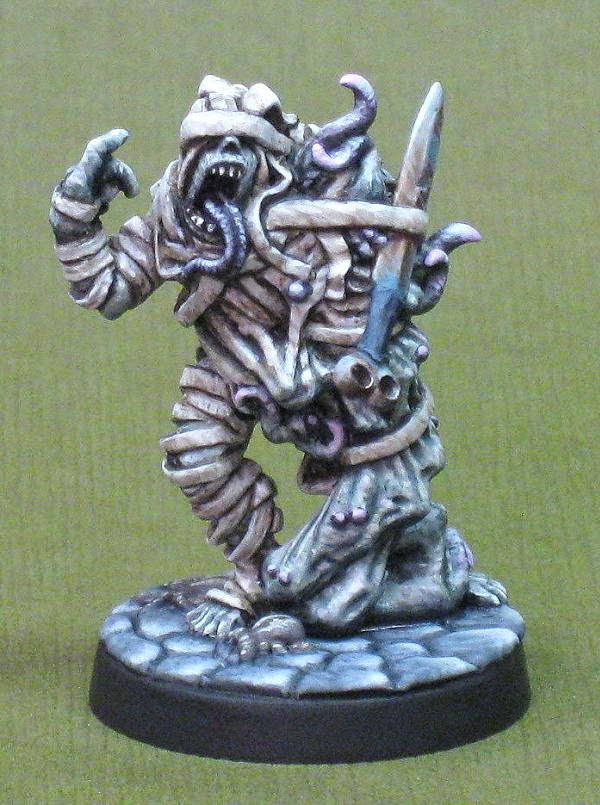 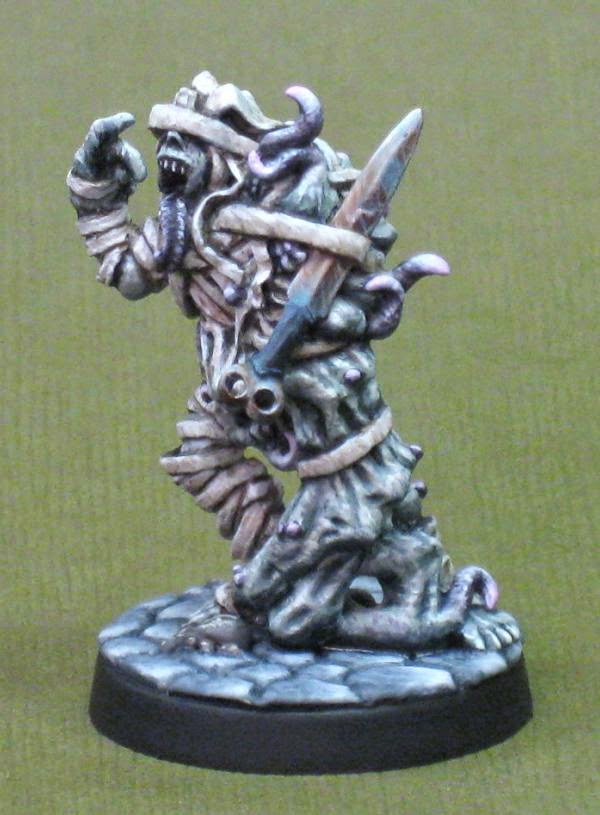 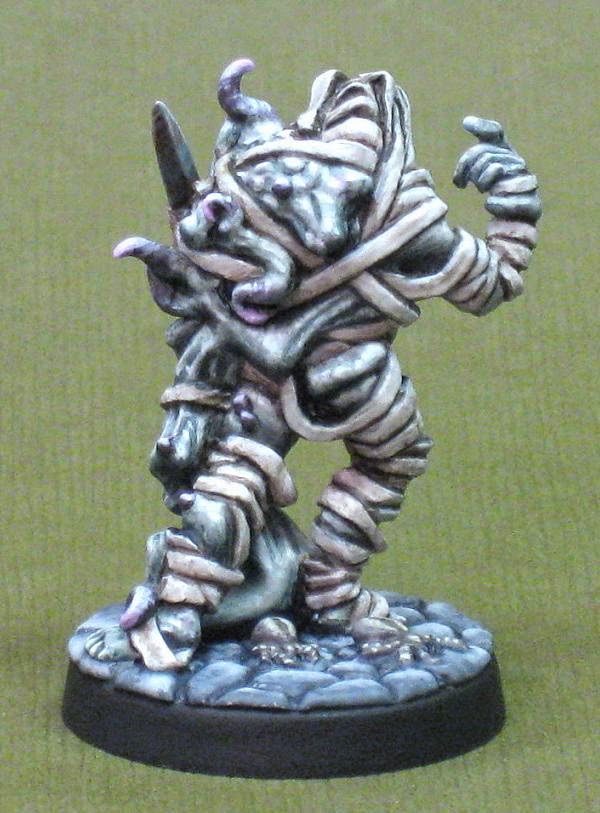 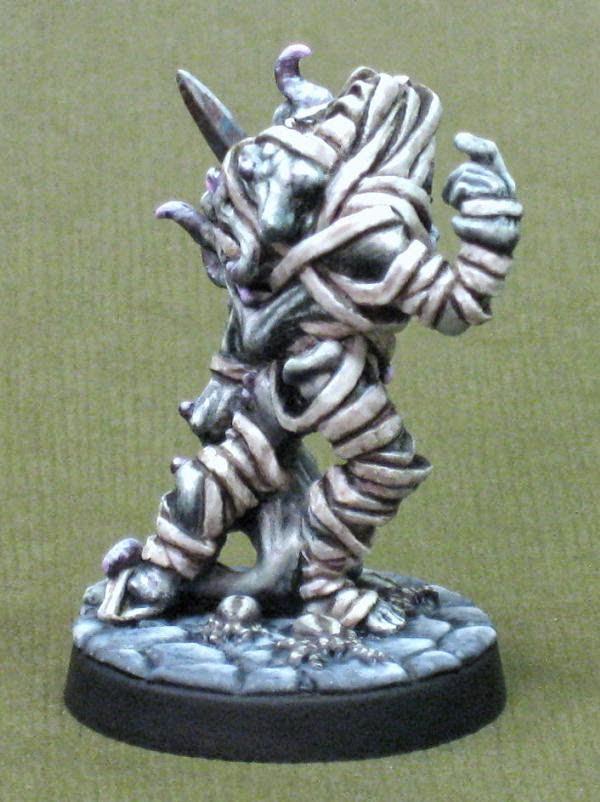