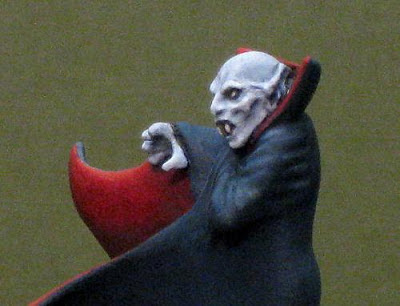 Happy Turkey-Day.  I'm sure everyone knows the critical role that vampires played in the first Thanksgiving. From teaching the pilgrims how to cultivate corn and survive in a hostile wilderness to participating in the storied feast, the undead were there every step of the way...

Is anyone buying this? Hmm, I thought not. Suffice it to say that I'm one holiday behind. 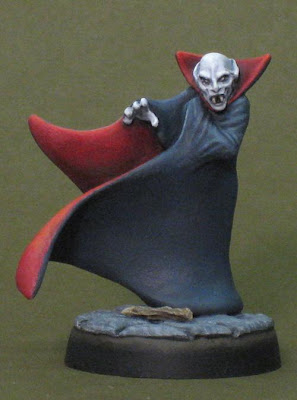 This old Grenadier mini was slated to appear in October along with a wight as part of Otherworld's ongoing painting pledge. The Wight made it, the vampire didn't. In the hope of rectifying this sorry state of affairs, here is the pair as intended: 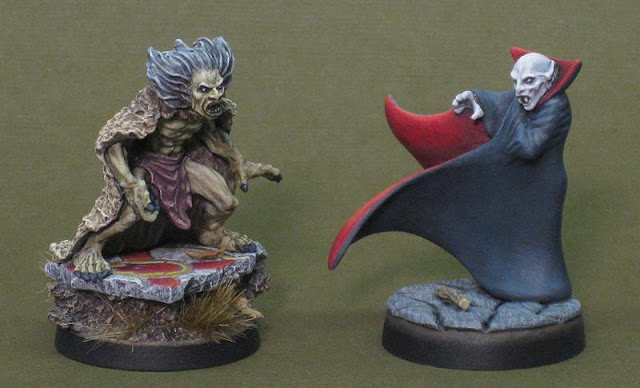 See that? A miniature world premiere right here on Minisbyfinch. Now you truly have cause to give thanks.

You're welcome. Glad to be of service.

Anyhow. Briefly returning to reality, a few notes are in order before awaiting the inevitable flood of gratitude by way of the comment section.

Skin tones: I wanted to depart from my previous efforts in the undead arena. Both minis began with a shaded basecoat. For the wight I then used Reaper's Moldy Skin, shaded with Secret Weapon's Sewer Water wash and highlighted by adding Reaper's Linen White to the mix. The vampire's base skintone started with a mix of Privateer Press' Carnal Pink and Reaper's Military Blue. More of the blue was added for the shadows while the highlights are Army Painter's Matt White with just a touch of the pink. Glazing was used extensively on both.

Bases: I sculpted the vampire's base myself. The wight's is an insert from Dark Age Games wet sanded and carved so as to fit on a standard 25mm base. This was done in large part to fit the mini onto a 25mm base rather than the 30mm one that Otherworld provides. The nails on the right foot were bent so they droop over the edge of the stone. The wight and his base were painted separately. 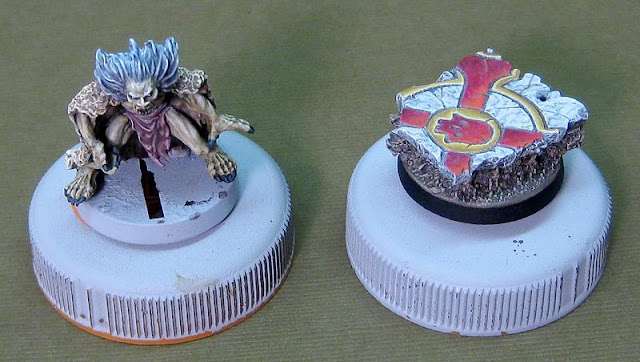 Together again: The wight joins his blister-mate that was completed some time ago. The record still goes to the vampire though; he's actually been sitting, prepped and based, in the lead-pile for many years. A priming mishap caused me to put him aside in disgust for all that time. 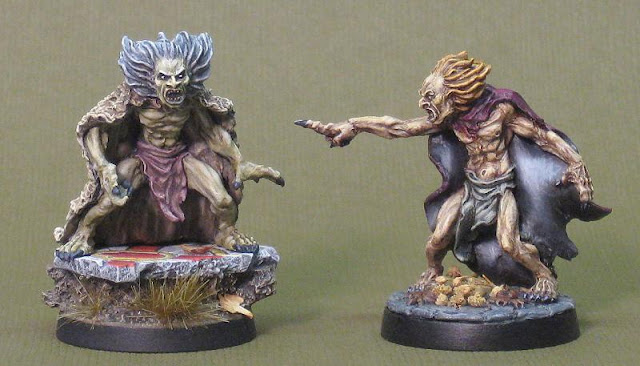 Faded Glory: There's an awful lot I don't know about digital photography. I greatly reduced the exposure to photograph the vampire due to his very pale skin. In so doing the wight wound up looking much better than in earlier pics. Must remember this in the future.
Posted by Finch at 11:37 AM