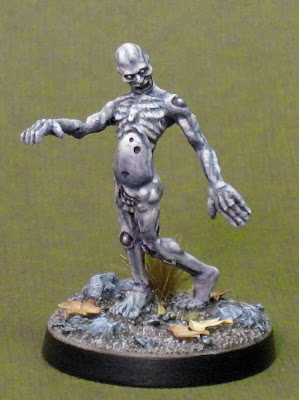 Too late for Halloween, another Heresy zombie limps into view. He did his best to be punctual, but it would seem that undeath takes a toll. The old boy just doesn't get around as well as he used to.

This was an exercise in producing results comparable to the first Heresy zombie from a couple weeks ago. They were painted entirely separately and, to my eye, match up nicely. 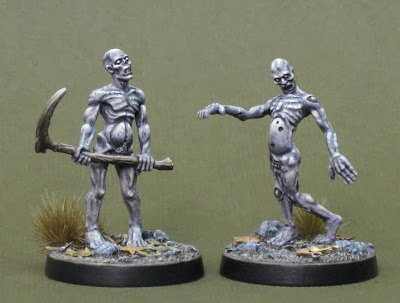 Less pleasing is the white, comma-shaped marking on his shin. I could try to pass it off as necromantic sigil of some sort; an unholy symbol of great power.  In truth, I slopped some paint in the wrong spot while finishing the base and only noticed while I was taking pictures. Oops.

I'll touch that up while painting the final two minis from the blister. Speaking of which, here they are in various stages of completion:

Before proceeding, I'll likely finish the owlbear and two gorilla bears that spent October on the back-burner. More on that next time.
Posted by Finch at 4:07 PM