The Hills Have Cankles 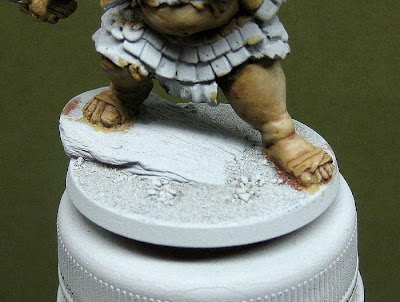 An update on the state of project hill giant. I want to finish before September arrives (the giants, not the post). I'll keep it brief so I can return to the painting cave ASAP.

I suffered a setback as a result of my basing. Of late I've been going ever smaller with the size of basing grit in an attempt to get a better in-scale effect. I've also noticed an issue in that I unintentionally wind up removing some of the the grit during the pre-primer wash. With this in mind I washed the giants, applied the grit, and then primed (in that order).

That was a mistake.

Once primed and basecoated it became obvious that a layer of fine dust had been deposited on sections of the mini and that consequently the final product was pretty well ruined.

There seemed no easy remedy so, after much cursing and a fair amount of hesitation, I hit the offending bits with steel wool, fine sandpaper, and a motor-tool equipped with a wire brush attachment. I then gave her a good rinse and re-primed. This greatly improved the state of things but it did take some time.

To paraphrase Ricardo Montalban from The Wrath of Khan: time is a luxury I do not enjoy. The on-schedule completion of the project is in doubt. 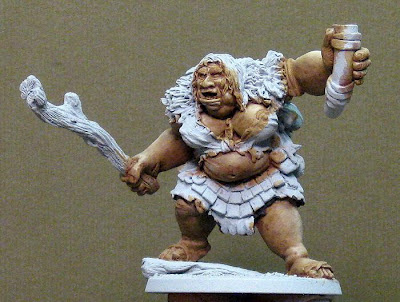 On the positive side of the ledger, I've gotten to play around with Reaper's olive skintones that were originally meant for the OW stone giant. I'm pleased with the results thus far.

Much work remains to be done.

Don't even get me started on the current state of the Otherworld hill giant.