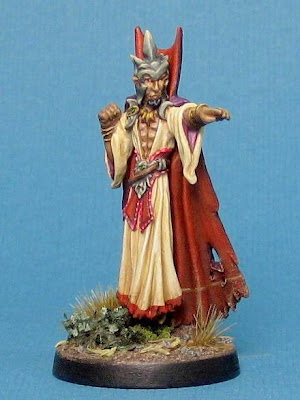 This is where I might offer a half-arsed explanation as to why I haven't posted in nearly a year. It's a long story. In the interest of brevity, and to preserve my positive state of mind, I'll forgo my tale of woe and just move on to new business.

The titular Von Pickford is none other than the evil wizard Johann Von Pickford from last year's Otherworld Miniatures' painting challenges; specifically, the December 11/January 12 installment. Chris (AKA DukeoftheBloodKeep) has done a great job of keeping the Members on the OW Forums engaged and producing painted minis from month to month. I must confess to being proud of my own small contribution to this continuing undertaking. 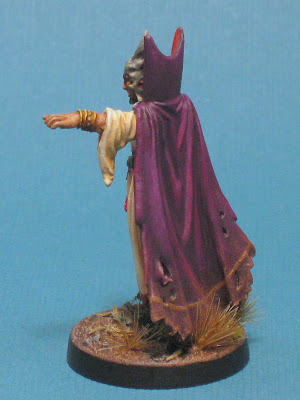 Ironically, the mini is produced by Reaper, not OW. The rules are pretty forgiving and require only a 50/50 mix of OW to non-OW products. I'm especially pleased with how the back of the cloak and my first halting attempts at freehand painting turned out. The skin-tone is a happy accident. I was aiming for a sickly, undead look by combining Vallejo Red Leather and Bronze Green with GW Rotting Flesh. Guess the tales of how the old masters would add green to their flesh tones are true after all. Despite my best efforts, old Johann wound up the very picture of health. Given the direction my experiment was heading, the undead angle was shelved, and I opted for ivory-colored robes as a contrast to my subjects dark complexion. 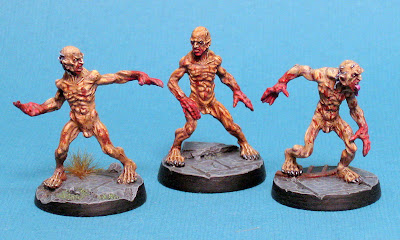 More suitably undead results were obtained on these ghouls (the OW component of my entry) by using a paint recipe similar to my previously completed wight. They're mounted on resin bases from Forgecraft. Nice bases. The garish paintjobs on the site do them a disservice. 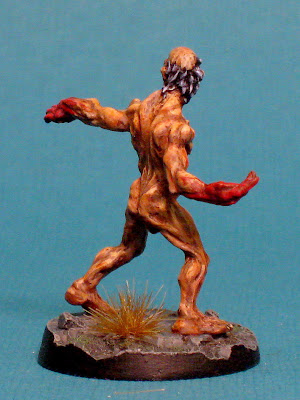 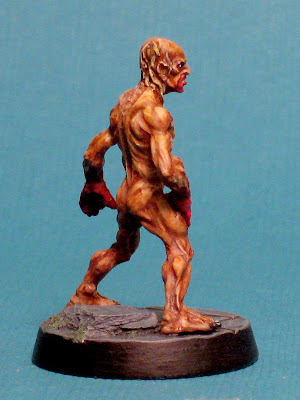 I'm a sucker for converting figures as well as obscure/unloved D&D critters. The forlarren (also part of my OW entry) fits the bill on both counts. Sandwiched in The Fiend Folio between the flumph (undisputed king of all crappy monsters) and frost man (so forgettable that in the time it has taken to type this, I've actually forgotten him) the forlarren gets no respect. If there is, or ever was, a miniature of this guy, I'm unaware of it. I once suggested on the OW forums that Richard consider producing a forlarren. I was asked to go away and not return until I had something sensible to say ;-) 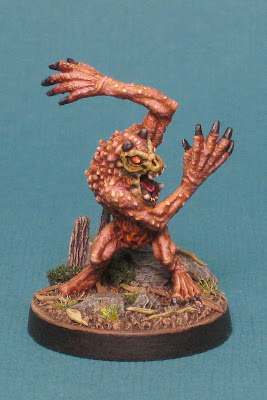 It seemed that if I wanted a forlarren, I"d have to build one myself. Or, being the lazy sort that I am, find an extant miniature that met my needs. Satyrs and demons offered the best hope and, in the end, an old Grenadier mini (M-20, Kadastraal Spreader of Plagues) came very close. Ultimately, I decided that his lack of hooves wasn't a deal breaker and went with him 'as is'.

The 'conversion' part of the project was limited to basing and painting. Placed in a woodland setting and painted in earth tones he really looks the part. A miniature's base is a chance to provide context. The same figure, if placed on a lava-themed or flagstone base, would not have conveyed the needed information.

It occurs to me too that Kadastraal was part of a box-set and some of his demonic brethren present similar opportunities for unmodified conversions. I'll have to put that on my to-do list. As things stand, I've committed myself to painting something by OW every month. There's no rest for the weary.
Posted by Finch at 8:17 PM