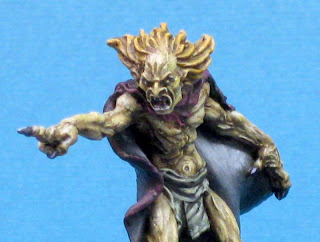 "The tomb in the day-time, ... when wreathed with fresh flowers, had looked grim and gruesome enough; but now, ... when the flowers hung lank and dead, ... when the spider and the beetle had resumed their accustomed dominance, ... and tarnished brass, and clouded silver-plating gave back the feeble glimmer of a candle, the effect was more miserable and sordid than could have been imagined. It conveyed irresistibly the idea that life - animal life - was not the only thing which could pass away."
Dracula by Bram Stoker

Ah, Spring. Daffodils bloom, robins sing, assorted mammals do whatever they do this time of year. Your humble author celebrated the changing of the seasons with a submission in The Otherworld Miniatures Forum's March painting challenge. The theme, like, so last year, required that OW minis from 2010 be featured. Inspired by the the quote above, I went with a wight (a sort of vampire wanna-be, for the uninitiated) and his retinue of creepy-crawlies.

From left to right, the minis are: an old WOTC grick, an OW Wight, and an OW giant leech. I used base toppers scavenged from various OW blisters in order to tie the three minis together. A liberal sprinkling of dead flowers was added for good measure. The wight was supplied with a 30mm base which I replaced with a 25mm one. The grick and the wight are pinned with wire; the leech is not.

More pictures can be found here.

I used Vallejo brown sand and dead flesh, Reaper stained ivory and GW brown ink and flesh wash on the wight's skin. The flowers are from a local craft store.

OW's April challenge is already underway. As the theme centers on humanoids, and my collection of unpainted lead is very thin in this area (at least of the OW variety), I may have to get creative in order to have a horse in this race. Stay tuned.
Posted by Finch at 4:39 PM