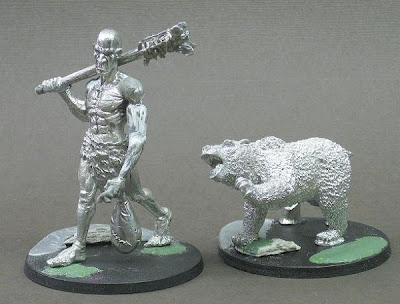 Work continues on the OW stone giant conversion. The sculpting is pretty much done. The base needs some additional attention and then it's on to painting. I even rustled up a cave bear sidekick (this season's must have accessory for the trendy stone giant). 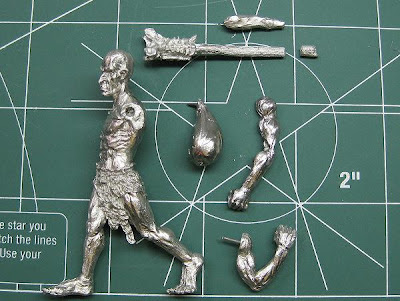 One of my goals was to replace the stock club (at the top of the picture above) with something larger. The new weapon comes from Reaper's Reptus weapons set (#14449). The jawbones lashed to its business-end are a nice detail and synch up well with the animal teeth hanging from the giant's belt. The Reaper club has a lot of extraneous detail beyond the jawbones that was removed. A file was then dragged forcefully along the surface to reestablish a bark/woodgrain  effect. 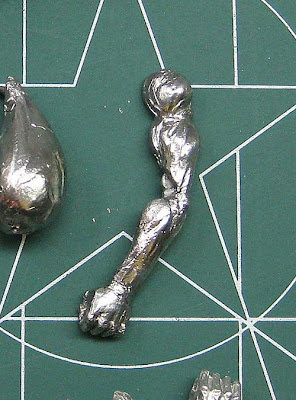 Another goal was to achieve a more relaxed pose by straightening the left arm and repositioning it closer to the body. A cut was made from the crook of the arm to the point where the elbow joint would be. It was then bent to the desired position and reenforced with metal scraps. Both arms were filed down considerably at the points where they meet the body. In this way the left arm was lowered and rolled forward while the right was rotated back nearly 90 degrees.

A lot of test fitting and pinning was done prior to final assembly. In places I reshaped the mini to allow for the new pose (the left shoulder-blade and bicep in particular). 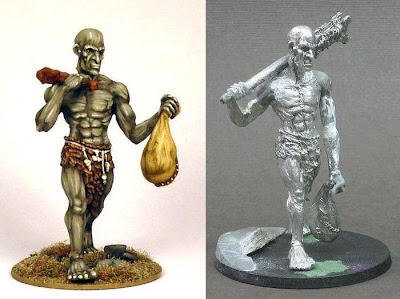 This side-by-side of the stock and converted versions illustrate the changes. The figure on the left is painted by Alex Bews and appears in OW's gallery. 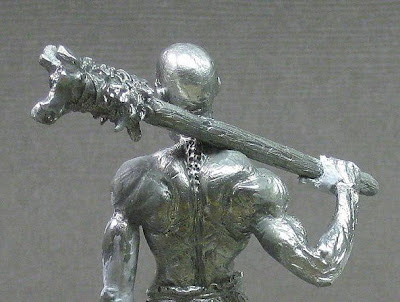 The sculpting went smoother than feared (pun intended). Armed with Privateer Press P3 putty, a newly acquired set of dental tools, and some pictures of the anatomy of the arm, I had at it. The sculpting to-do list consisted of: both shoulders, the thumb and fingertips of the right hand, the end of the club, and the open end of the bag. A useful tip gained from sculptor John Pickford over on the OW forum: use Chapstick to lubricate tools and assist in smoothing out the final product. The stuff works like a charm.

I also found this post by Patrick Keith very helpful. 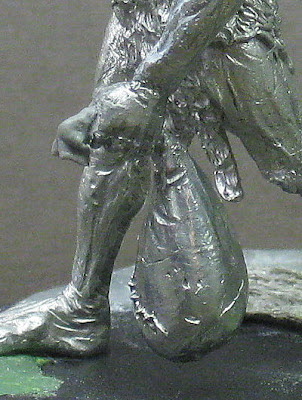 To form the open end of the bag, I rolled out a thin sheet of putty, formed a small tube, and attached one end to the hand. I then inserted a closed a pair of tweezers into the other end and carefully allowed them to open, thereby expanding the tube. Once the putty was thoroughly stretched, I poked at it a bit until I was satisfied with the overall shape.

Maybe it was all the poking and stretching or perhaps the result of some Chapstick in the wrong spot, but once dry the whole assembly promptly fell off. I cleaned the mating surfaces with rubbing alcohol and superglued it back on. Have my fingers crossed that it stays put.

I also have my fingers crossed that the painting goes as well as the sculpting. To be continued.
Posted by Finch at 9:08 PM