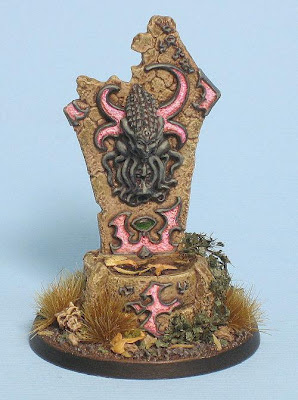 I recently completed a small terrain piece (Reaper's 03969, Well of Chaos) that had previously been part of a painting challenge on the OW forums. Why wasn't it quite done when originally presented? Read on. 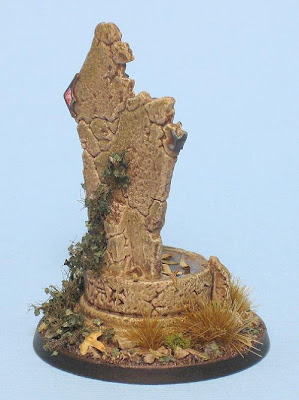 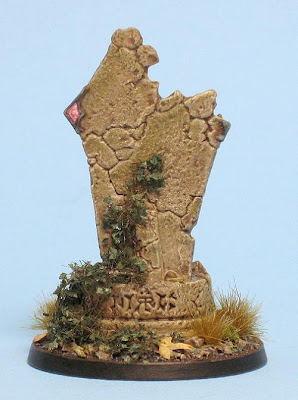 Basing materials reside in many places; some readily apparent, some less so. One source that straddles the line between the obvious and obscure is the model railroading hobby. (I would say the allied model railroading hobby but I suspect the steam-or-diesel crowd might contest the point.) My utilization of this resource has been aided by the fact that a model railroading shop sits two doors down from my LGS. I used two products from Woodland Scenics on the well: Scenic Glue and Realistic Water. 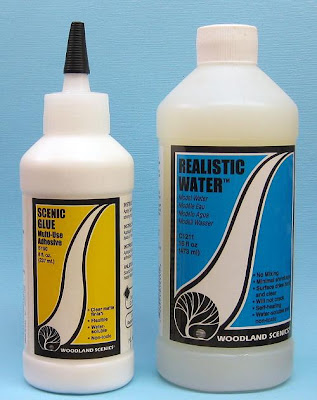 Scenic Glue is basically a PVA adhesive that dries with a matte finish, as opposed to a standard PVA like Elmer's that dries with a gloss finish. It allows the addition of various and sundry basing bits (grass tufts, leaves, etc.) without any unwanted shine. A very useful, easy to use product.

Realistic Water, on the other hand, is not deserving of such unqualified praise. In point of fact, the stuff had me tearing my hair out. This is not to say that it produces poor results nor that it is especially hard to use. The problem lies in the number of applications required.

The degree to which the product shrinks while drying is astounding. I filled the well to the desired depth (not exceeding 1/8" as per the directions), waited 24 hours, and was left with little more than a shiny depression for my efforts. It took SEVEN such applications to bring the water's surface to the point where it was reasonably level. So, allowing for drying time, it took a week to produce a puddle. Very frustrating. 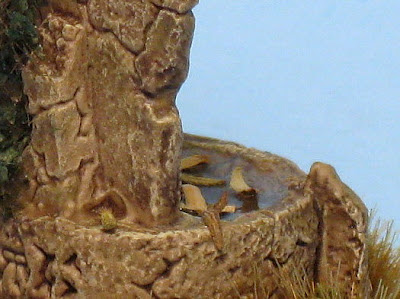 As a bonus, with each use the puddle's surrounding edge unavoidably became slightly higher. I had intended only to fill the well about 2/3 of the way. In the end it wound up flush with the brim. Some of the resin wound up creeping onto the mini in a spot where the resulting shine was unacceptable. Despite the label's warning against using any kind of sealer, a little matte varnish fixed the problem. Some leaf litter was added with the final layer. aesthetics aside, this also served to hide a nasty air bubble that cropped up earlier in the process.

On the plus side, I had used the product once before, so most of this came as no surprise. On the negative, I still have an enormous bottle of the stuff, and it wasn't cheap.

Enough of this unpleasantness. I came through my trial by water unscathed and am happy with how the mini turned out. What else could I ask for? 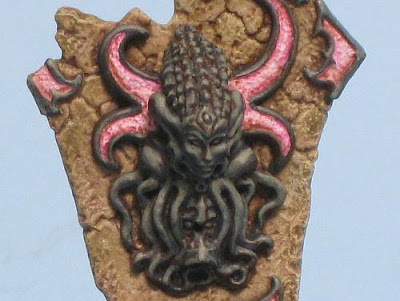 Is it just me or has Bob Ridolfi's sculpting really improved during his time at Reaper? I don't mean this as a slight towards his earlier efforts, rather that his more recent work is so good. The face on the well is superbly executed. Great concept too. With her beehive hairdo and tentacles, she looks like H.P. Lovecraft's take on Marge Simpson. Very cool..
Posted by Finch at 3:22 PM