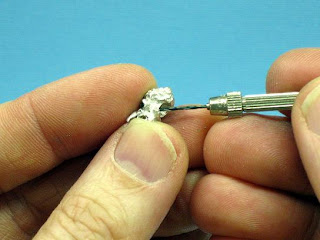 As promised, I have returned with details about what I was working on before my Summer hiatus. The last minis I completed prior to going AWOL were the two Otherworld trolls; excellent sculpts that include a wealth of conversion and customization potential. One neat feature is that each model provides a choice of two heads. Consequently, I was left with a surplus of troll noggins in my spare parts drawer.

At this point, a box lot of minis won on eBay some time ago entered into the equation. Among its various items was a Ral Partha troll from 1982 of the proper size to comfortably accept an OW head. The old mini had a separate head and body configuration that would facilitate a straightforward head-swap. 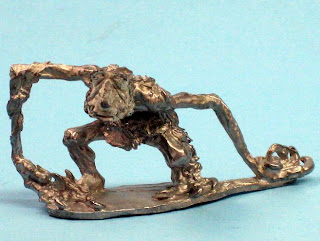 Normally I'd tend to shy away from major conversion work on a classic mini. In this case, I was prepared to make an exception. I remember this guy from when he first appeared in RP's catalog. My initial impression remains to this day: I like everything but the head.

Beyond producing a figure more to my tastes by merging old and new, there was another benefit to this conversion. I already had two completed OW trolls in my collection. The RP troll, with its extremely long arms and oversized claws, is quite distinct from OW's interpretation. By mounting an OW head in place of the original, a strong family resemblance would be created. 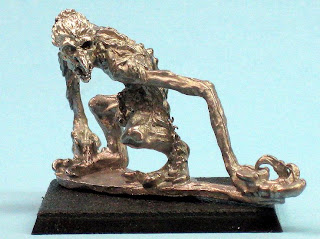 A soak in Simple Green made short work of a scruffy coat of primer. In order to turn the head I cut away the original neck and replaced it with a bent piece of wire. Despite my preference for round bases, a square one is needed to accommodate the left arm. The RP mini includes what seems to be aquatic vegetation draped over its body, as though it has just emerged from the water. What we have here is a freshwater scrag or river troll; the creature from folklore that dwells beneath bridges and waylays unwary travelers.

I intended to cut away the original base and mount the mini on a stone floor similar to the OW trolls; a major undertaking. I see now that doing so would carry the family resemblance concept to excess. A base is the chance to depict a mini in its environment; to place it in context. This fellow belongs on a river bank, not in a dungeon.

Summer's over. Time to get cracking.
Posted by Finch at 12:38 PM